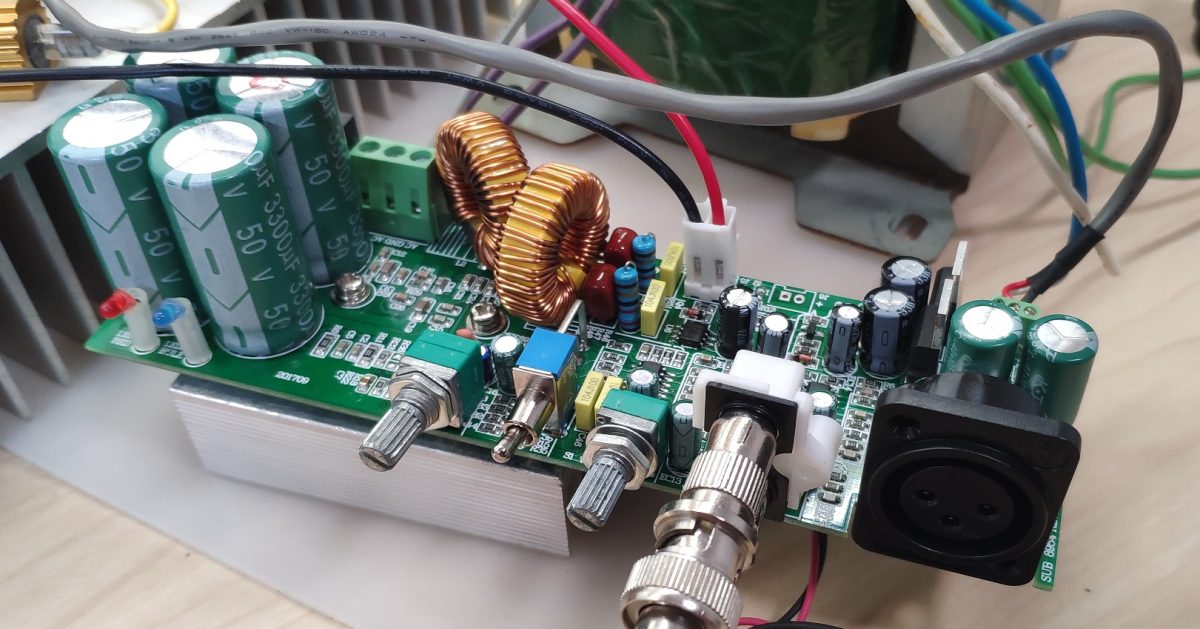 In this post I’d like to briefly share my thoughts on a subwoofer amplifier board I’ve purchased from AliExpress a few weeks ago. I have purchased it as a cheap solution to test an in-wall subwoofer I’m building (2x10inch woofers model R1S4-10 from RF in sealed enclosures). I looked for an amplifier that will have ~400W output power into an 8ohm load (bridge connection), although I doubt I will ever need this much power, or even half that. I’m actually more interested to see how much output power I can get before distortion gets out of hand, with the hope I could get ~200W before onset of clipping. I would obviously much prefer to have a plate amplifier for this, but I haven’t found one that seemed to meet all my needs for a reasonable cost, so I went with plan B. As all temporary things, if it works well it will probably be turned into a fixed solution, so I was interested in seeing how it will perform on the test bench.

The board I’ve purchased is based on the TDA8954TH chip, and is meant to be powered from a transformer (rectifier and bulk capacitors are mounted on the board). Additionally it has a few extra’s which make it useful as a subwoofer amplifier. It has an adjustable low-pass filter (LPF), it has volume control, and phase reversal switch. Additionally, it has a built in signal detection circuit that switches the amplifier chip into power-down mode when there is no signal for a substantial amount of time (a few minutes). Overall, for about 25$ delivered, its a very cheap option to power subwoofers.
The board calls for 2 center tapped windings (or 2 transformers) to operate. I’ve fed it from a 2x28VAC transformer for the high power section, and 2X12VAC for the low power section (pre-amplifier/detection circuit). To these wondering how much current it draws from the low voltage rails (which are always on), its ~20mA (a couple of mA more when the blue LED lights up when once input signal is detected).

After replacing the power input connectors with screw terminals for an easier connection on the bench, I’ve started measurements.  Measurements were carried out with the measurement pre-amplifier I’ve designed and posted on the blog in the past, as well as the EMU 0404 USB that was posted here too. First is the frequency response with the cutoff set to the maximum frequency setting. As can be observed in Figure 1, this translates to a -3dB frequency of 120Hz. At the opposite extreme, this was at 50Hz. The roll-off seems to be quite shallow, not as sharp as I’ve expected it to be.

Next I’ve measured the maximum power output before distortion started to sharply role up. I’ve measured at 85Hz so that the harmonics are distinguishable from the 50Hz pickup. In this test the 50Hz pickup is quite substantial as the high power 28VAC transformer was sitting only a few cm away from the amplifier board which isn’t shielded. Placing the transformer further apart does improve it, but I didn’t measure the residual with the transformer placed very far away.

Figure 2 shows the spectrum (up to 20KHz) at 35Vrms output, into an 8hm dummy load (4x 2ohm Dale RH-50 resistors in series). This translates to 150W output power. THD is fairly low at the conditions and is measured to be 0.037%. While this isn’t as impressive as some higher quality class D amplifiers, its not bad, and these power levels the subwoofer itself will have fairly large distortion. However, that’s the exact sweet spot for this amplifier. Going higher in amplitude resulted in a very sharp climb in distortion. Going to 40Vrms (200W) THD was orders of magnitude higher, as Figure 3 shows. Even at just 36Vrms THD was almost 5%.

I have tried connecting it to a dual 41V DC power supply capable of delivering 12A per rail, just make sure the transformer wasn’t the limiting factor here, but the results were almost unchanged. So despite that 420W figure in the description of this board, I was unable to get even half that with the board I have and low distortion figures.

One thing that was very apparent is that this board has very high gain. It seemed to be very sensitive and I had to turn the volume down significantly to get it below clipping. To mitigate this I’ve reduced the generator (EMU 0404 USB) output amplitude further. After doing so I’ve measured the gain of the amplifier board, and was surprised it has a huge gain of X500 (54dB). Seems like the pre-amplifier section there has almost 20dB of gain which results in this high overall gain. So that’s something to take into account when using it.

So overall its far from being a high quality subwoofer amplifier. However, considering the small size and low cost, I think its more than reasonable. Considering I’m using it with a high power transformer I’ve salvaged from an old Sansui 5-channel receiver (so it was free), the total cost of this is lower than anything else I could think of to be used as a sub-woofer amplifier. Perhaps in the future I will give another amplifier module a try and see what can be had for a few extra $.

EDIT March 28, 2020:
I wasn’t too happy with the very high gain and the insufficient attenuation after 120Hz, so I’ve decided to modify this. The circuit is built with a 1Kohm series resistor at the input, followed by a 10Kohm pull-down resistor to ground. This feeds a non-inverting amplifier, which in turn feeds an inverting summing amplifier (to combine L+R). Both the input and the summing amplifier have caps to bypass at high frequencies, but they are way above the hearing threshold of 20KHz, so useless as a LPF for a subwoofer. I’ve therefore modified the amplifier to have larger capacitance at these points and replaced a couple of resistors to reduce the gain. The overall gain was reduced from 54dB to 37dB (X70 instead of X500). The -3dB point was shifted to 110Hz, with much sharper roll-off (extra 20dB at 1KHz). This will now be much more useful as a subwoofer amplifier.

2 thoughts on “TDA8954TH Based Subwoofer Amplifier Board from AliExpress (25$) Any Good?”