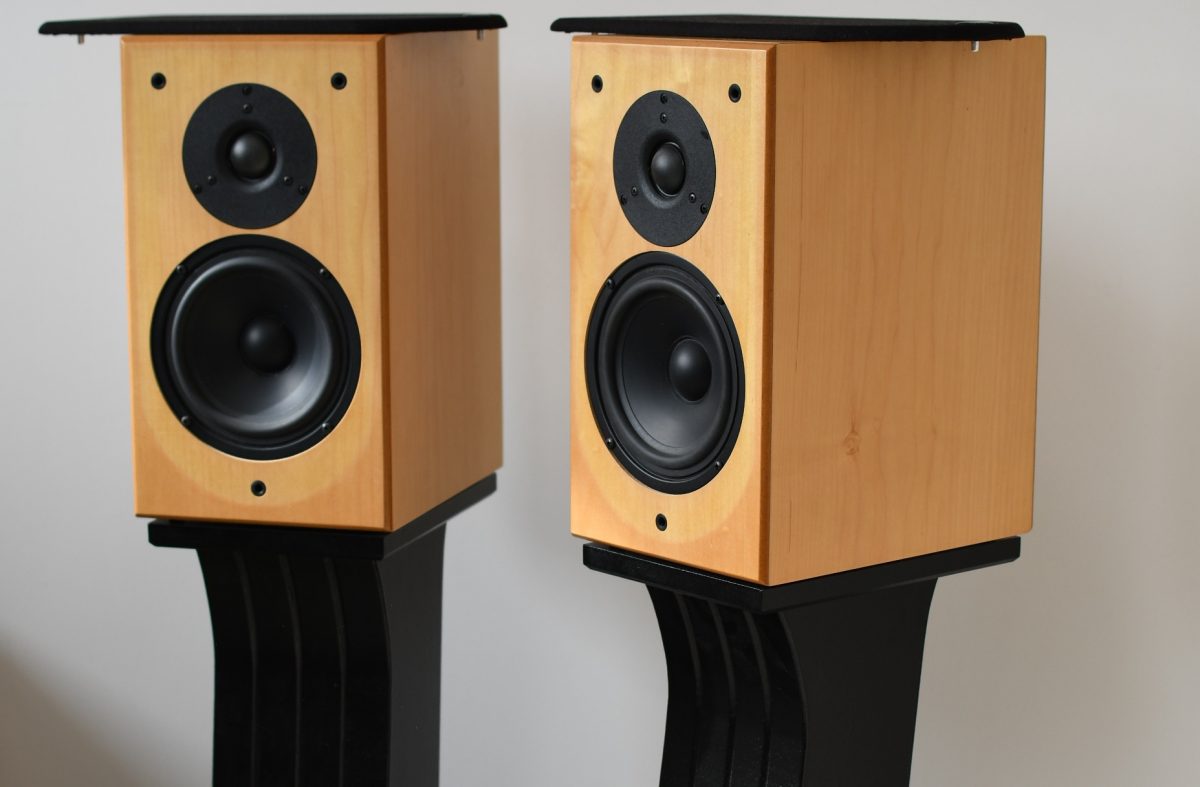 This one is going to be the first, and one of the only posts I share, that isn’t electronics related. However, it is definitely audio related, as it is about a pair of stands I’ve built for bookshelf speakers. While I have been using mostly floor-standing speakers for some years now, every now and then I did use bookshelf speakers. This is especially true when talking about placing speakers next to my work bench, where space is at a premium, and large floor-standers aren’t really needed.

Therefore, in the spirit of DIY, I’ve decided its time to build a nice looking pair of stands that will be used for this purpose. I’ve looked at quite a few stands, but decided to take the shape from a pair of Sonus-Faber stands that I really liked. This was only fitting, as at the time I’ve had a pair of Concerto Home bookshelf speakers to match them. Since I have neither the tools, nor the experience, of working with steel, I’ve opted for a build made entirely out of MDF. In this post I’ll try to share some of the methods I’ve used in building these stands. I think they are quite straight forward and easy to follow, so that even a novice (like me) could use them quite easily.

The first step was to draw the external dimension, and order materials accordingly. Other than the 17mm thick MDF used for the stands, I’ve ordered a few pieces of 6mm thick MDF to be used as a stencil. The stencil is one of the technique you can use to create multiple nice looking pieces easily. So after sketching the shape on the 6mm thick MDF, I’ve used an electric jigsaw to cut out the rough form, and than some sanding paper to smooth it out manually. The result was a stencil that could be used for the legs of the stands.

The plan I had was to create 16 pieces using this stencil, each would be 17mm thick, so that each stand will be ~14cm wide once assembled. There for I’ve used a pencil to mark the shape of the stencil over the thicker MDF, then using an electric jigsaw I cut it slightly larger than the marked shape.

Next,  I clamped the stencil onto the slightly over-sized, roughly cut piece, and trimmer it to size using a trimmer (a router can be used instead).

The next step was to prepare a similar stencil, and follow the same steps to create the pieces to be used for the bottom base of the stand. To be able to create this form, I’ve used a few parts from the parts-bin as a guide for the trimmer when creating the stencil. The straight parts are quite simple to create, you can use anything, even an extra piece of MDF. For the rounded part, simply find something with the appropriate radius. In this example, I’ve used a round plastic standoff (1 out of 4 that I’ve taken out of an old Yamaha receiver that was thrown away).

The top base in my build was a simple square form, so there was no need to cut it manually or create stencils for it. Next it was time to same move forward with adding the diagonal edges, and putting pieces together. For the front this meant gluing pieces of the leg in pairs, and then adding a 45 degree angle using the trimmer, as well as a similar angle on the bottom bases. For the bottom base I followed a similar form for most of the back of the stand as can be seen below.

Next I continued gluing pieces together, to form a solid ~14cm thick leg of the stand. Once this was done, I drilled the holes to mount the bottom base to the leg, screwed it all together, and moved on to sanding it all to get smoother transition between the different pieces. This was also a good opportunity to see how it comes together before moving on to paint. I would like to add a small note regarding sanding. At the time I didn’t own an electric sander, so it was all done manually. Therefore, while using an electric sander will make your life much easier, you can get away with not using one.

Now it was time to get it ready for paint. One thing that you must take into account when painting MDF, is that it will absorb paint quite differently between parts that were worked on compared to these that weren’t. There are a few method of getting over this, but I chose a relatively cheap and easy method. I’ve used PVA  glue (wood glue) mixed with water, and brushed it over the rough edges where the MDF was cut. This will stop the MDF from absorbing too much paint in the next step. To show how effective this can be, have a look at the following picture comparing the two.

If you choose to do so, be careful to use the right glue/paint combination. Depending on the type of PVA glue you use, it might, or might not, be water soluble. If you use a water soluble glue, be sure to use a paint that isn’t water based for the next layer. I went for a white base coat, applied with a simple brush, followed by two coats of black semi-mat paint.

One final step before putting it all together was adding the final touch to the bases of the stand. For the top stands I’ve use simple thin rubber stickers to hold the speaker in place. However, for the bottom base, I wanted adjustable spikes that will be able to handle uneven surface, in case the floor isn’t completely flat. I’ve purchased a couple of options from AliExpress, but was quite disappointed in the quality when they’ve arrived. Lucky for me, I didn’t have to keep trying other types, as a friend of mine offer to help. He was working on a lathe at the time, and offered to machine the parts I need if I simple draw it out for him. A couple of weeks later I got the spikes, and I must be honest, I couldn’t have been happier with them. They were looking great, and felt very solid too. I considered painting them black, and even tried it on one of the extra spikes I had, but finally decided against it.

Now that everything is in place, it was finally time to put it all together for a final photo-shoot, and call this project done.