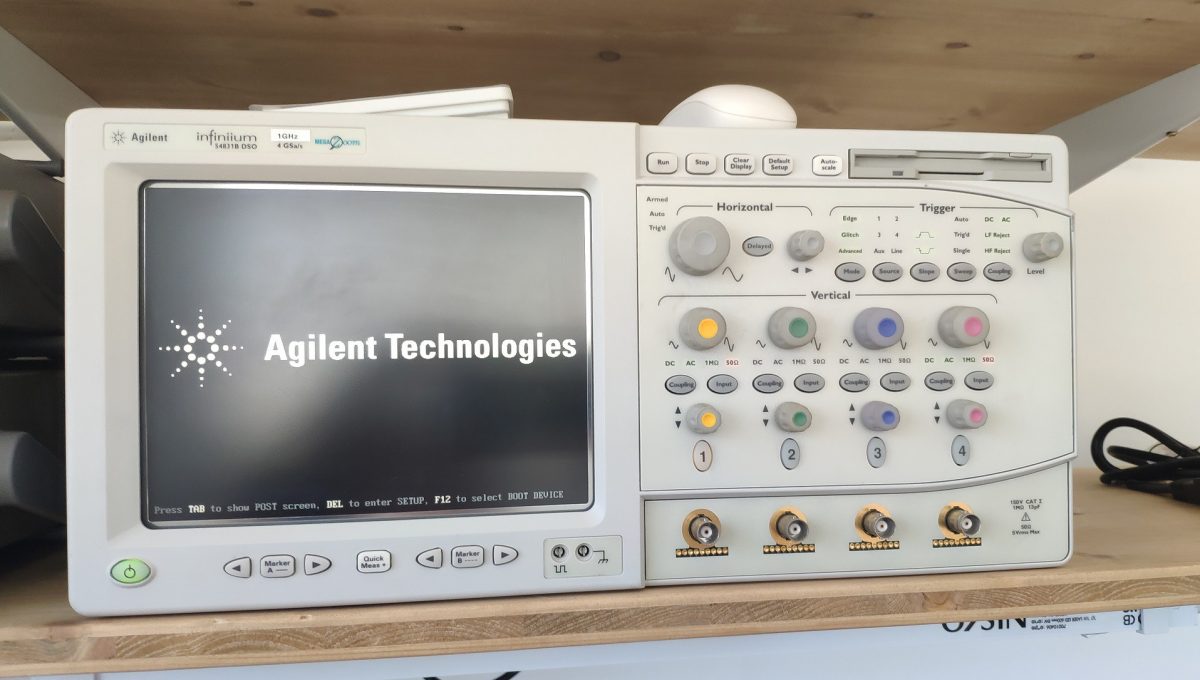 Just like any other DIY electronics hobbyist, a scope is one tool I can’t live without. Over the past few years I’ve owned the renowned Rigol DS1052E (which was hacked up to the 100MHz model), and more recently a Siglent SDS1204X-E. Both were great for the price and their respective time to market. The DS1052E was probably among the first scopes that almost every hobbyist could afford, and the SDS1204X-E was much more capable with more channels and processing power and its MSO option (which at the time was quite buggy, but I understand it has improved). However, the thing I was missing is the ability to probe (relatively) high speed signals. I wanted something that could do 500MHz, and preferably even 1GHz. Getting such a high BW scope would cost quite a lot of money brand new, so I knew I had to look for some older used units. After reading a bit on different forums, I’ve decided that an Agilent 54831B would be a good match for my needs. In this post I’d like to describe some mods I did to the scope to make it better suited for my needs. Hopefully some other readers will find this useful to learn about this scope, or how to mod it if the need arise.

Other than the 54831B from Agilent there were a few other candidates with similar spec from Tektronix as well as other companies that could be found on eBay for a reasonable price . However, the overall list of compromises with the Agilent seemed like the best match to my needs. There were a few other things that caught my eye about this unit while searching for more info about it online. The 54831B is a 4 channel 600MHz scope. There are two other similar models, the 54831M and the 54832B. The first of these two was produced for the Military, and had a few differences such as slightly weaker PC HW inside and an older operating system (win98 instead of winXP).  The 54832B was the higher BW 1GHz version. Since the sample rate is just 4GSPS per pair of channels, if you activate more than a single channel in the pair (CH1-2, CH3-4) the BW would drop to about 600MHz to prevent aliasing.
One interesting thing people have noticed is that the 54831X seemed to have a similar BW when it was operating in equivalent time sampling, you could get to over 1GHz. A quick look on the EEVblog forum resulted in this discussion that confirmed this extended BW could be unlocked completely by removing a single resistor on the acquisition board. Reading through the forum further resulted in this discussion which shows quite a few possible changes to the scope, along with a batch file that can let you unlock some additional SW options, as well as the deep memory that was pre-installed inside the unit.
These looked like very promising “free” upgrades that will add to the use value of the unit.

So I’ve ordered myself a 54831B with winXP installed, as well as a used set of the 1165A probes to go along with it. When the unit arrived I have confirmed it was working and then started experimenting with it. First, I’ve removed the identification resistor on the acquisition board to get the 1GHz BW. This worked like a charm, and I have confirmed with an external generator that the -3dB BW was now 1.25GHz. When the second channel of the pair is activated the BW limit is obviously turned back on to prevent aliasing, and the BW drops to ~700MHz.

Next I turned my attention to the HDD. Before moving on with the SW hack I wanted to create a backup image of the HDD in the state I have received it. I also wanted to replace the old HDD with a SSD to make it boot faster, produce less noise, and hopefully last longer. This called for a few steps along the route. First, the old PC inside the scope only has PATA connection, none of the modern SATA back then. This meant I needed an adapter, which doesn’t sound like a problem, until you read the fine prints. Seems like most of the PATA->SATA adapters you can get use a very problematic chip at their core and suffer from poor performance and multiple failures. There are still some places selling the more expensive converters that use a Marvell chip at their core, and I was able to get a couple of these from eBay – one to use, and one as a backup for the future. Now that the SATA conversion is done, we need to solve the power problem.

The unit uses a power supply that is used to power both the “PC” and the “Scope” portions. It has no power connectors that could be used for the SSD (the original HDD used a different connector with only 2 pins), so you will have to improvise a little here. I didn’t want to cut the original wiring to split it, so instead I’ve used a spare 20pin-24pin power adapter I’ve had. These were used in the past to connect more modern PS’s to older motherboards that used the 20pin connector instead of the newer 24pin.  As the 24pin connector simply added 4 extra wires at the end, and they include a 12V,5V, and GND connections, these extras will give you all you will need for the standard 4pin molex connector as well as a SATA power connector. Cut the 4 extra wires, crimp/solder them to a Molex connector, and everything is easily reversible if needed since we’ve only hacked the added adapter.

So far so good, and the SSD is indeed recognized as needed. To create an image from the original drive I’ve tried a couple of programs, including True Image which didn’t go well. After loading the image onto the SSD the unit wouldn’t load windows. I’ve decided to give another program a try, and went with HD Clone 8, the free version. I did a direct clone from the HDD to the SSD (and made sure I save an image on my laptop in case I’ll ever need it), and this time everything booted and logged into windows without an issue. The SSD is quieter than the HDD, but you can’t really hear the difference over the multiple fans inside the scope case. Boot time was a few seconds shorter, but nothing to write home about. Most importantly, this was a new drive that I expect would last longer, and that is the main reason I wanted to make this change.

Next I’ve turned my attention to the SW hack, I’ve used the modified executable, and modified the text file to have the SW options I want (jitter analysis, serial decoding, etc), as well as deeper memory, and gave it a shot. Everything seemed to work as expected, so a great thank you to all these who have shared these modifications on the EEVblog forum.

This was where I have left things off a couple of weeks after getting the scope last year. However, the more I’ve used it, the more I was annoyed by how noisy it is. It has 8(!) fans inside of it. 1 for the CPU, 1 for the PS, 6 for the case (3 for the PC side 3 for the Scope side). So finally, a few weeks ago, I’ve made the decision these fans had to go. I’m using the scope at home, not in an industrial lab environment, so the 54831B must be “domesticated” and the noise brought down to a reasonable level. After taking the scope apart and checking the different models here is what I can share:
1 – The CPU fan is a 50x10mm 12VDC fan from Delta model EFB0512HA. It has a speed monitoring pin which you can track in the BIOS (or using a 3rd party SW), but it isn’t used for any safety function, so if no speed indication is available the unit works as expected. Therefore you are free to use which ever fan you’d like. I went with a MF50101V2-1000U-A99, which is slightly quieter than the original fan, and has almost identical air flow.
2 – The PS fan is a 60x25mm 12VDC fan from Panaflo model FBA06A12U, with a locked rotor sensor. However, after closer look I’ve noticed this isn’t actually used at all and only 2 wires are connected. So again, you can use which ever fan you want. I tried a 2410SB-04W-B59-B00, but it was almost as noisy as the original fan despite the difference in the spec. So instead I went with a MF60251V2-1000U-A99 which has indeed made a significant difference.
3 – The case fans are NMB-MAT model FBA08A12H, with a locked rotor sensor too, and in these fans it seems it is used. You can either use one with the same sensor, or if you want a larger variety of fans to choose from, you can always bypass it – you simply connect the sensor wire (white) to the ground lead to pull it low (looks like on the scope board its pulled high by a 10K resistor) and the unit will think the fan is operating as expected. With 6 fans, seems like there is significant safety margin here, and even if 1 will die on you, nothing is going to happen. For my amount of use, these fans are going to outlast me by many years so I didn’t see any problem to use a fan without a sensor and I’ve opted for 3110SB-04W-B40-E00.
With that being said, it obviously makes sense to make use of these sensors if possible. The only reason I didn’t use such fans is because I’ve ordered the replacement based on the model number of the original fans, I didn’t examine the case fans too carefully before removing them for replacement. I have checked the spec of the original case fans on the Digikey website, where it seems there is a mistake and the FBA08A12H are marked as having 2 wire leads instead of the 3 wire leads with locked sensor option.

The PS fan is by far the noisiest in the unit, so if you are only going to replace one, this should be it. I went ahead and replaced all of them, I’ll feel better knowing I did the most to make the unit quieter as it is sitting on my bench and was getting very annoying. After the replacement, I’m happy to say, the unit is much much quieter. Don’t get me wrong, its not going to win any awards for being the quietest scope around, but its now significantly better than it was, and its quite enough for me to be able to work for hours with the unit running on my bench.